You know better than anyone how your child’s life has been impacted by the COVID-19 pandemic.

Although many kids are remarkably resilient, some are still struggling to adjust with the changes.

This is natural. The routine that once made them a sense of control and freedom have been erased. Classrooms have become computer screens, playgrounds were closed, and their friendships were put on pause.

It’s understandable that they might feel irritable, frustrated, or even sad sometimes.

Wondering how you can support your child’s mental health? Here are 3 tips:

1. Talk to your child

Children feel big emotions that they don’t always have the words for.

So it’s best to ask and help them identify how they feel about the current situation. Validate their emotions. Explain why they can’t go out. Ask if they have concerns or questions then answer in a truthful, calm way.

Reassure them that you are always there whenever they need someone to talk to.

Kids can feel and do better during this challenging time if they get enough sleep, eat healthy meals, and exercise regularly.

Encourage activities that boost their mood, such as watching child-friendly shows like Superbook.

3. Help them develop a sound mind

Everyone—including your child—is prone to stress, cabin fever, and moments of fear.

Help them develop a sound mind and find comfort in God by teaching them how to pray.

Children may call (02) 8-737-0-700 or send their prayer requests through Batang Superbook’s Facebook page.

-Responsible for the brand’s growth on assigned social media platforms

-Ability to multitask, work under pressure and beat deadlines

-Knowledge in Adobe Creative Suite is a plus

-Knowledge in Photography is a must

Calling all pastors and teachers!

The global pandemic has been transforming the lives of adults and children alike.

Things are changing, but one thing remains the same: the calling to share God’s love to children and teach them to live and love like Jesus.

If you want to maximize your online platforms to reach out to children and conduct online events for the kids, Superbook is here to help you!

Superbook offers the Online Kids Event 101, a series of free online workshops to help you equip and maximize online platforms in sharing the gospel to the children. 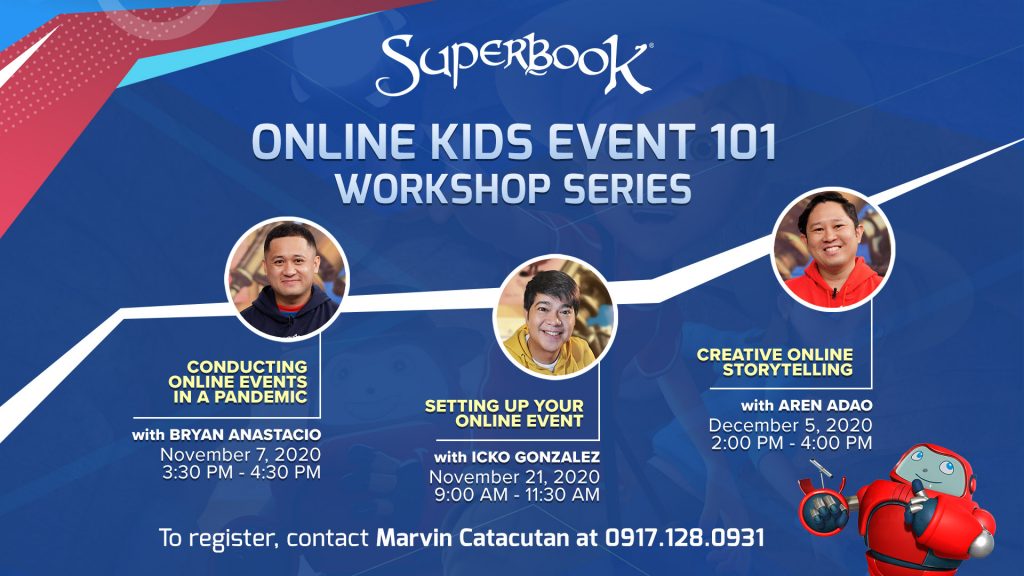 And yes, you have read it right – you may attend for FREE!

Learn about Conducting Online Events in a Pandemic with Bryan Anastacio of Philippine Bible Society. The workshop will take place this Saturday, November 7, 2020, from 3:30 PM to 4:30 PM via Zoom.

Catch Icko Gonzalez of Superbook Philippines as he shares his insights on Setting up Online Events on November 21, 2020, from 9:00 AM to 11:30 AM.

Lastly, know more about the art of Creative Online Storytelling with professional host Aren Adao on December 5, 2020, from 2:00 PM to 4:00 PM.

Know the hows and whys of setting up your online events for kids! Reserve your slot today and register by clicking this link and answering the online form.

If you missed watching your favorite animated Bible series on TV, cheer up! Superbook and The Flying House are back! 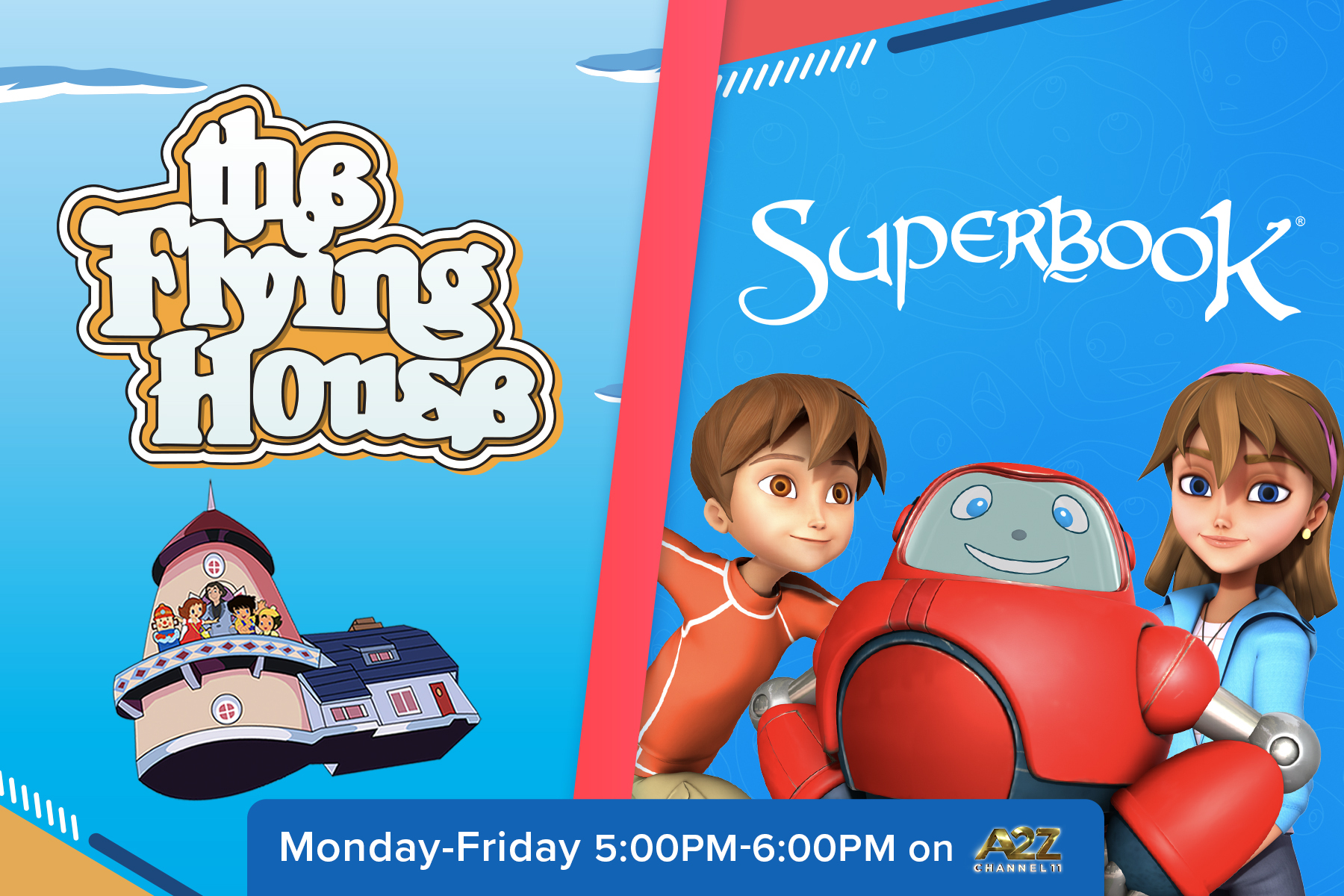 The well-loved children’s shows are now airing on A2Z Channel 11. A2Z is ZOE Broadcasting Network’s newly rebranded channel through an agreement with ABS-CBN.

Watch back-to-back episodes of Superbook and The Flying House, Mondays through Fridays from 5:00 PM to 6:00 PM. That’s five days a week of Bible fun and exciting time-travel adventures! Now, parents and kids can spend more quality time with their children while helping them learn and apply the valuable lessons depicted through the shows.

Are you looking for ways to celebrate Holy Week with the entire family during the enhanced community quarantine?

Good news! Chris, Joy, and Gizmo will help you travel back in time to witness the awesome stories and miracles of Jesus!

Superbook Reimagined will air on ABS-CBN every 6:00 a.m. from April 9 to 11, Maundy Thursday to Black Saturday. It will feature Jesus’ miracles in “Jesus Heals the Blind”; Jesus’ victory over temptation in “Jesus In the Wilderness”; and Jesus’ teaching about prayer in “Teach Us to Pray”.

Superbook is an award-winning Bible-based animation series that teaches children timeless moral truths and life lessons through the adventures of Chris, Joy, and their robot friend, Gizmo!

A typical Filipino child enjoys watching television every day, especially animated shows. To the kids, it could be a fun, easy way to learn while keeping themselves entertained.

To an 11-year-old boy named Paterno, watching children’s shows, especially his favorite animated series Superbook, is a perfect way to spend his Sundays.

“Whenever I watch Superbook, I learn good life lessons. It also shows how God helps people in times of struggle. I am so happy to watch Superbook!” exclaimed Paterno.

According to Paterno, his mother would allow him and his three siblings to watch the show as it helps them revisit Bible stories in a fascinating, colorful, and action-packed way! Because they are of Visayan descent watching Superbook in Filipino helps them expand their vocabulary.

This is exactly why Paterno and his classmates were so thrilled when Gizmo and the Superbook team visited Catagdaan Elementary School in Pilar, Bohol last January 22.

Together, they watched the courageous story of David against Goliath in A Giant Adventure. They also played exciting games such as the “Balloon Caterpillar” game which fosters cooperation with each other, followed by “Finding the Lost Sheep” that illustrates God’s love for His children.

The kids also loved the “Certified Batang Superbook Quiz”. Lastly, they were super thrilled to sing and dance along The Salvation Poem with Gizmo. Everyone, including Paterno, later prayed and accepted Jesus as their Lord and Savior.

“I am so happy to see Gizmo, it’s my first time to see him!” said Paterno who encouraged other kids like him to watch Superbook. “You should watch Superbook because you will learn how to mingle with other people. [Because of Superbook], it’s easier for me to be friends with other kids.”

To Paterno’s mother, their family loves Superbook and its timeless moral values as it became a safe place not just for her children, but also, for the whole family.

“I encourage him [Paterno] to watch it because he can learn good values from it. I want my children to know the lessons it brings like being polite and generous to others. I, too, watch it at times because of the life lessons it teaches like love for family, generosity, and the importance of going to church. It’s not just for kids,” shared Sonia.

Do you also want to have that Superbook experience in your church or school? Partner with the
Superbook team now! Visit the Batang Superbook website and Facebook page to know more.

Weeks after its eruption, the Taal Volcano continued to spew flumes of ash and smoke. Residents within the 14-kilometer danger zone fled to safe areas for refuge. To this day, families who used to live near the crater are suffering in the aftermath of the volcano’s eruption.

Kids staying at the evacuation centers met Gizmo and had the chance to sing and dance with him. They enjoyed group games and puppet shows. Aside from relief packs, the children also enjoyed Superbook goodies.

The children who looked downcast when the Superbook team arrived beamed with hope after watching Superbook’s “Job”episode. They learned that God can still be trusted even in times of calamity and hardship.

“I learned to count on God and never lose hope in difficult times,” shared Brandon. “Job lost everything, yet he still prayed to God. Let’s continue to hold on to God because He is always guiding us.”

Hans was so excited because “Job” was his favorite Superbook episode. “Job’s sufferings were caused by Satan. Even after losing his family and possessions, Job still trusted God,” he shared.

“Thank you, Superbook, for helping us! Our worries have gone away because you came,” Hans cheerfully said.

Your partnership with Superbook goes a long way! Help us reach more children affected by the Taal Volcano eruption. Go to batangsuperbook.com/supergifts and invest in the lives of the next generation!

“It is important that we teach children good values because they will carry it with them for the rest of their lives,” shared Rosenda Garces, a first-grade teacher from Enrique Jose Elementary School in Kibungan, Benguet.

In the morning, before her class begins, Rosenda lets her students watch Superbook.

“Superbook is a good TV program for children,” said Rowena. “Superbook teaches good manners and fear of the Lord. If children will watch Superbook, they will grow up avoiding bad behavior and fearing God.”

Last January 11, Gizmo and the Superbook Team had the chance to visit the elementary school where Rosenda was teaching. Her school is in the far-flung community of Madaymen in Kibungan.

Kibungan is a cool, mountainous municipality in the Northwest section of Benguet, more than 300 kilometers north of Metro Manila. In partnership with Pathfinders Outdoors Club, more than a hundred children enjoyed watching Superbook’s “A Giant Adventure” and were given school supplies, toiletries, and goodies.

9-year-old Ainor is one of the fans of Superbook in Barangay Madaymen. She was so grateful for all that she has learned while watching the episodes. “Thank you, Superbook, for teaching us about God, for teaching us good values,” she said.

Ainor’s father, Jim, also shared how Superbook has been helpful to him and his wife in teaching discipline to his children. “Because of Superbook, my kids learned to obey us without complaining,” Jim shared. “They now have the initiative in helping with the household chores. I pray that my children will grow up in the fear of the Lord and that they will be excellent in school.”

Superbook is a great tool in teaching important life and faith values to children and leading them closer to God.

Partner with us in bringing the Gospel to children around the Philippines. Visit www.batangsuperbook.com/supergifts today!