When you are at your lowest point, it’s hard to make sense of anything. Right now, you probably feel terrified and helpless. Hopeless. Wondering if you can still get back on your feet.

Truly, there is nothing more difficult than to find yourself stuck in the darkest moment of your life.

Don’t worry. You are not alone.

Ed Embradora knows how you feel. At the young age of 16, Ed found himself in a dark place—drug addiction. It eventually led him to dealing drugs himself, which got him into prison multiple times and separated him from his family.

“In prison, our food was like pig’s food. Sometimes I couldn’t stomach it, but I had to eat it anyway just to survive. I see prison as a place that is cursed, it’s just like hell,” Ed recalled.

Life in prison was tough, but it became even harder for Ed as he was eventually diagnosed with Hypokalemic paralysis. This disease placed an unbearable discomfort on his back and made physical movement very difficult.

Life did not make sense for Ed anymore. He often saw it as meaningless. He even wished for himself to just die so that his hardships may end.

Like Ed, have you ever been pushed to your limit and were on the verge of quitting?

Have you ever questioned where God is during the darkest valleys of your life?

In times like this, be still and know that God will never leave you. He is right beside you.

Ed was devastated, but God soon revealed that He had greater plans for him just as God has great plans for everyone.

God provided opportunities for Ed to hear His Word. Ed encountered God inside the prison and accepted Jesus as his Lord and Savior—praying and believing that the Lord can change him.

“Despite my messy life, I believed that Jesus can turn and make it as white as snow,” Ed said. He also fervently hoped that God would heal his body from the disease that plagued him. Thankfully, God did not disappoint.

One night, while watching The 700 Club Asia inside his prison cell, Ed witnessed the hosts praying for people with severe back pain. He responded and claimed the prayer of healing for himself with all his heart.

With just one prayer, Ed felt that the pain in his back was released, and he was able to move around with ease. His strength was renewed, “For those who will believe and trust the Lord, they will receive a miracle!” he exclaimed.

After experiencing God’s miraculous healing, Ed dedicated his life to God and committed to attend Bible study groups to grow in his faith.

He was eventually released from prison and from the chains of his past. With a brand-new life, he continued to follow God and is now reunited and serving the Lord with his family.

From a life that seemed meaningless, he now enjoys a newfound purpose in Jesus Christ. Indeed, when Jesus enters the scene, He changes your life!

You too, can experience God’s transforming grace. If you feel stuck in the darkest moment of your life, you can surrender everything to Jesus so He can shine light into your path. Allow Him to transform you from the inside out.

“Therefore, if anyone is in Christ, the new creation has come: The old has gone, the new is here!” (2 Corinthians 5:17 NIV)

Help people like Ed know Jesus and His transforming love. If you have the desire to reach out to others through CBN Asia, call 8-737-0-700 or visit cbnasia.org to partner with us today! 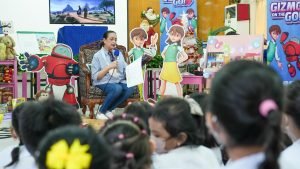