Let’s start with a fact.

The latest figures from the Philippine Statistics Authority showed that suicide rate increased by 57% in 2020 compared to the previous year. Suicide took the lives of 4,420 Filipinos — the highest in 14 years!

Despite these alarming numbers, a lot of misconceptions and stigma still surround the topic of suicide. Common labels are applied to suicide victims, survivors, bereaved families, and to people who struggle with suicidal thoughts.

Stigma, or the fear of being stigmatized, prevents most people with suicidal thoughts from seeking life-saving help and treatment. Survivors bottle up their shame because they worry about how they would be seen by their loved ones and society. People who have lost someone to suicide experience more rejection, shame, and blame than other bereaved people.

Misconceptions on suicide also result in uncertainty in others about how to approach and help someone through their pain. So survivors of suicide, people suffering with suicidal thoughts, and even those who have lost loved ones are often left isolated and unsupported.

This is why it is important to shed light on any stigma as they can result in terrible consequences. Let’s take a look at some common myths surrounding suicide and uncover the truths behind them:

Attention and help are drastically different from each other. Having suicidal thoughts indicates that a person is facing mental or physical health challenges, according to Medical News Today. It’s not a need for clout or attention – it is a clear sign that that person needs help.

Here’s another alarming truth: People who talk about suicide sometimes act on it. In fact, the World Health Organization says that majority of suicides have been preceded by warning signs, including verbal or behavioral red flags.

So, when you or someone you know is thinking or talking about suicide, take it very seriously.

Myth #2: Asking someone if they are thinking about suicide will make them do it.

Fact: Talking openly and carefully about suicide can prevent it.

Simple questions like “Are you having suicidal thoughts?” or “What are the reasons why you don’t want to live anymore?” can spark life-saving conversations.

Fact: Anybody can develop suicidal thoughts.

Suicidal thoughts and actions can affect people of all ages, genders, life status, or health conditions. It is pervasive. It touches everybody, depending on their life situation.

As stated by the National Alliance on Mental Illness, many individuals with mental illness are not affected by suicidal thoughts. Likewise, not all people who attempt or die by suicide have mental illness.

Fact: People who attempt suicide think about their loved ones.

Often, people attempt suicide because they mistakenly think that they’re a burden to others. They worry about hurting their family and friends, so they try to shoulder their pain as best as they can.

But as they’re clouded by feelings of hopelessness, they tend to conclude that their loved ones are better off without them.

Believing that “suicide is selfish” stops the conversation. As Healthline suggests, keep the conversation open by reassuring people with suicidal thoughts that they aren’t a burden and that help and support are available.

Myth # 5: People who have suicidal thoughts are lacking in faith.

Fact: Suicidal thoughts can affect anyone, even people of faith!

Due to the notion that suicide is an unforgivable sin and that feeling hopeless somehow translates to a lack of faith, believers who struggle with suicidal thoughts feel shame and hesitate to seek help.

While it’s true that hope, healing, and comfort come from God (Exodus 15:26), mental health struggles are real, too. Even the people God had worked with in the Bible were afflicted with suicidal thoughts.

Suicidal thoughts do not determine a person’s faith and eternal destiny. However, it affects those who are left behind. Bereaved families are left seeking for answers, comfort, and hope.

Thankfully, the Word of God offers a hope-giving promise to everyone affected by suicide: Nothing can separate a believer from the love of Jesus Christ.

“For I am sure that neither death nor life, nor angels nor rulers, nor things present nor things to come, nor powers, nor height nor depth, nor anything else in all creation, will be able to separate us from the love of God in Christ Jesus our Lord.” (Romans 8:38-39 ESV)

We are also here to join you in prayers. Together, let’s lift your concerns to God. Call the CBN Asia Prayer Center at 8-737-0-700.

If you are, then you can relate to the story of Marinel Ulang.

Depression was commonplace in Marinel’s world when she was first diagnosed with it in 2017.

Thankfully, things got better somehow. She managed to overcome, but as the pandemic started to raze the country, Marinel lost her job as a freelance bookkeeper while her father was hospitalized due to severe asthma.

Her father was placed under intensive care and was automatically tagged as Person Under Investigation (PUI) for COVID-19 because of his respiratory illness. Jobless with an ailing father and increasing hospital bills, Marinel found herself slowly spiraling into hopelessness once again.

As days went by, her thoughts became darker.

“I was thinking of ways to end it all. When I saw a knife in our house, I was back to the nightmare I experienced in 2017. I was back and I needed help,” Marinel said while holding back tears. Suicidal thoughts started to engulf her.

At the seeming end of her rope, Marinel came across a post about the CBN Asia Prayer Center on The 700 Club Asia Facebook page.

She tried to contact the Prayer Center through Skype and received a call that changed her life.

“I received a call from a prayer counselor. That time, my mind was a mess. But what she told me struck me. She said, ‘God loves you and you’re not alone in your struggles. God will send someone to help you. God is always there for you,” Marinel recalled.

Who would have thought that because of those simple yet assuring words, Marinel will experience God’s love?

It gave her the strength to hold on to life and believe that God has a greater plan for her future.

He surrounded her with people who supplied food and helped her settle their hospital bills. Through God’s grace, her father recovered and is now strong and healthy. Marinel is also blessed with a job that enables her to provide for her loved ones.

It was the glimmer of hope that she’s been waiting for.

“No matter how dark it is, God is there. He will send people to help you. My experience made me realize that God’s love will never forsake us, so why would I be afraid?” Marinel gladly shared.

No matter what you are going through, know that your pain is temporary, and God’s love is permanent. Wherever you are at right now, God wants to meet you because He knows your situation. You may not see it right now, but you have an assurance that He loves and cares for you, and He has greater plans for your future.

“‘For I know the plans I have for you,’ declares the Lord, ‘plans to prosper you and not to harm you, plans to give you hope and a future.’” (Jeremiah 29:11 NIV)

Hope is God’s promise for you.

Receive His hope by visiting this page or calling the CBN Asia Prayer Center at 8-737-0-700. You may also reach us through Skype (The700clubasia), and we would love to encourage you through prayers.

Have you been in this kind of situation before?

Even when you have the best intentions, you could find yourself fumbling for words when someone confides in you that they are struggling with their mental health.

Yes, it can be scary to talk to someone who has suicidal feelings – let alone a friend or a family member. But doing so can really make a difference, and literally save a life.

So, if a loved one tells you that they are thinking of ending their life, here are a few tips to help you handle those conversations. 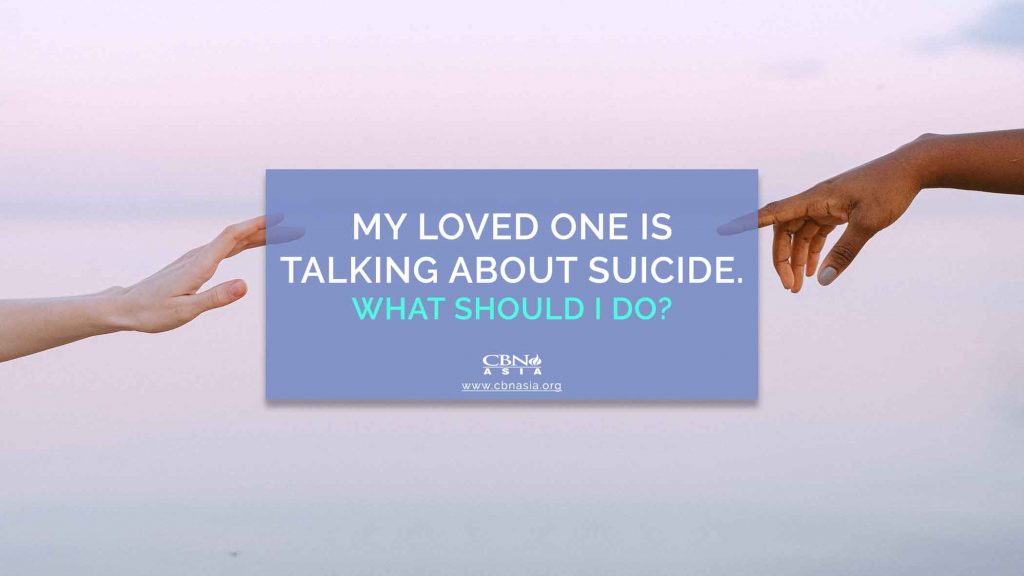 If somebody around you talks about wanting to die, take it very seriously.

Don’t call them a drama queen, don’t call it a joke. Don’t brush them off as simply wanting to gain sympathy or attention. They are reaching out for help. Taking action is always your best choice.

Here’s a myth: People who talk about suicide won’t actually do it.

But here’s an alarming truth: people who talk about suicide sometimes act on it. In fact, the World Health Organization (WHO) says that the majority of suicides have been preceded by warning signs, including verbal or behavioral signs. It is better to err on the side of caution instead of judging them.

Also, do not blame your loved ones for how they feel. Speaking up about it may be a huge step for them already.

Have the initiative to ask open-ended questions that encourage them to talk. A simple “How are you feeling?” could mean a lot.

Your loved one is totally overwhelmed by their current situation and is unsure of how to express their feelings nor seek help. Whether they gave subtle hints or mentioned suicide directly, calmly ask what is happening and assure them that you are willing to listen and you care.

Tip #4: Don’t skirt around the topic of suicide

Contrary to popular belief that talking about suicide only encourages the deed, WHO says that it is okay to talk about it.

Talking about suicide can reduce their anxiety and helps your loved one feel understood. So, if you feel that your loved one might be suicidal, don’t be afraid to use the word “suicide”. Don’t hesitate to ask direct questions such as: “Are you having suicidal thoughts?” “What are the reasons why you don’t want to live anymore?”

Initiating the topic, being direct, and letting them know that they can open up to you can be a huge relief for them. More so, direct questions are more likely to bring about direct responses.

Don’t try to handle the situation all by yourself. Encourage them to seek help from a professional – like a doctor, a mental health professional, or a counselor.

Although the Filipinos are often portrayed as among the world’s happiest and most resilient people, the fear of the unknown and the uncertainty of the future amid pandemic might trigger negative feelings in anyone.

If your loved one talks about suicide, know that emotional support from people who matter to them can prevent suicide. Gently assure them that you got their back and that things can get better as you seek help.

Most importantly, pray that your loved one would encounter God’s love, healing, and light even in their darkest days.

We want to pray for you and your loved one!

Together, let’s lift your worries to God. You may call the CBN Asia Prayer Center at 8737-0700 anytime.